In the days, weeks, and months following the Battle of Gettysburg, journalists and newspaper editors feverishly attempted to recapture the full details, implications, and meaning of the massive fight that had transformed one small, formerly obscure, south-central Pennsylvania town into a household name. While some reporters struggled to ascertain the exact facts of the battle amidst the chaotic aftermath, others wrote with clear political agendas intended to sway the hearts and minds of their readership and, in turn, bolster their respective side’s support for the war effort. Still others searched for meaning in the aftermath through the prisms of religion, world history, and other lenses.  In this mini-series, students will explore the myriad ways that 19th-century newspapers, throughout the North and South, “re-fought” the Battle of Gettysburg, its factual components, and its larger significance in print in the immediate aftermath of the fighting. 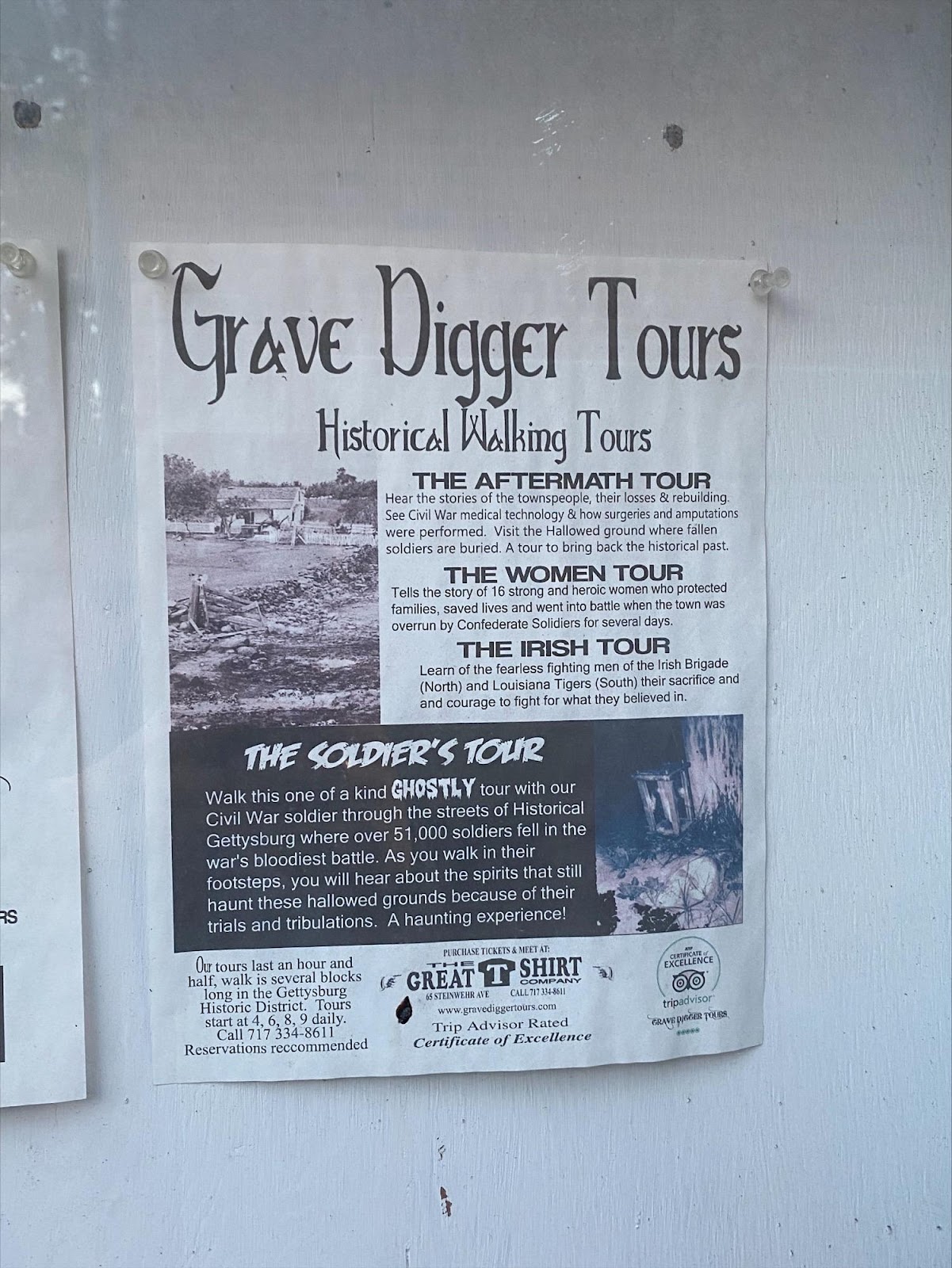 Pictured above is an advertisement for four different tours offered by “Gravedigger Tours,” which is posted in an alleyway adjacent to the “Great T-Shirt Company,” along the commercial district of Steinwehr Avenue. Through Gravedigger Tours, visitors can explore Gettysburg’s Civil War history in a less traditional way via the focused lenses of four specialized tours.

Three of the four “Historical Walking Tours” offer something different from your run-of-the-mill ghost tour, concentrating squarely on the specific historical content outlined in their descriptions, rather than on ghost stories and lore. Visually, however, the poster places a disproportionate emphasis on the strictly paranormal “Soldier’s Tour.” Additionally, the macabre name of the company itself projects an overarching focus on the grisly and the ghostly, as well as on emotive history, rather than on history that is strictly factual or filled with nuanced complexities. In an attempt to evoke a certain haunting emotion, this tour description emphasizes the ghastly and grim, and makes sure to especially highlight that Gettysburg was the war’s “bloodiest battle.”

All four tours’ siloed approach to history and the company’s clear interest in appeals to emotion, death, destruction, and the paranormal distinguish this tourist attraction from the many other competing ghost tours and historical walking tours offered in town. The “Aftermath Tour” touts an exploration of the battle from the perspective of the townspeople of Gettysburg, how they were impacted by the battle, and how they ultimately rebuilt. At the same time, the description notes that those on the tour will see “Civil War medical technology” in addition to amputation demonstrations. This tour comes across as alluring largely due to the somewhat voyeuristic window it provides into the graphic nature of the battle’s destruction, playing more so on morbid curiosity rather than purely historic interest; however, it still seeks to appeal to the emotions of those who are more historically-minded, claiming to “bring back the historical past.”

The “Women Tour” and “Irish Tour” also distinguish themselves from traditional, comprehensive historical tours, as they play heavily on identity politics to draw people in. Women are portrayed as universally brave and brazen, protecting their families, going into battle, and saving lives. Such a description portrays the battle for Gettysburg’s women as a largely monolithic experience and one that generalizes the roles of women during the war; while there were undoubtedly many courageous women, only telling their stories overlooks the women who struggled to survive and rebuild in the wake of the battle. This tour seemingly targets a very specific demographic of Gettysburg tourists: The empowered female who perhaps laments the absence of women’s stories within the traditional battle narratives and is looking to help celebrate the reclaiming of women’s historical agency through such grandiose tales.

The “Irish Tour” also appeals to hearts and emotions with its fairly one-dimensional descriptions of the famed Northern Irish Brigade and the Southern Louisiana Tigers, emphasizing their seemingly universal “fearless fighting, sacrifice, and courage.” While members of both Irish units undoubtedly exhibited such qualities, one doubts that this tour will dive deep into the variance within these units, the backgrounds of the men themselves and the challenges they faced due to their ethnicity, their complex political motivations behind taking up arms, etc. This tour would certainly attract the proud descendants of Irish Civil War soldiers from both the Union and the Confederacy; however, in singling out a highly romanticized pair of units and subset of the soldier demographic as particularly glorious and heroic, it is also seeking to appeal to those who have either heard of these famed units before or those in search of an iconic and “uniquely dramatic” tale of two particularly colorful units. A short walk through Gettysburg’s commercial district reveals that the area plays up “selling the Irish” quite a bit. In addition to “The Irish” walking tour, visitors can eat at one of two Irish pubs, and shop in an Irish-them store that sells imported Irish products. The walking tour presumably plays to much of the same demographic as the shops and eateries, and the tour company knows that such a sentimental and popular-history approach to the battle will surely appeal to a core group of Gettysburg tourists.

These narrowly focused, largely identity-based tours provide intriguing, though siloed, windows into particular slices of the battle and its aftermath. The variation between the types of tours means that there is something for everyone; though they target paranormal enthusiasts with their “Soldier’s Tour,” Gravedigger Tours also offers a dose of “real history” with their other three tours. Indeed, although these hyper-specific tours carve off specific slices of history and appeal to a largely emotive, monolithic connection with the past at the expense of a more comprehensive or more intellectually nuanced narrative, they do allow visitors to identify with particular “players” in the battle, and in doing so, facilitate a deeper dive into one subset of the historical past. Such an approach creates an immersive and memorable experience for a core group of tourists whose imaginations and curiosity about the past just may receive the necessary provocation to continue exploring the history of Gettysburg through additional means.

One thought on “Digging Death, Selling History: A Unique Take on Historical Walking Tours of the Civil War’s Bloodiest Battle”

Join us on social media